Tax Cuts for Christmas? + An Interview With A Friend

Puerto Rico Interview With A Friend 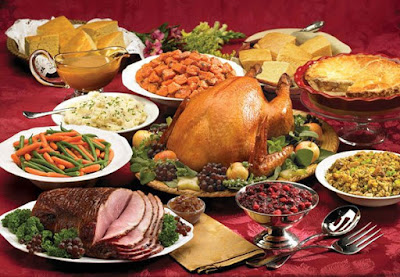 On this Thanksgiving, I wanted to share my interview with a friend who has family in Puerto Rico.  Her family's experience is a reminder that we should be thankful for our blessings and remember those who are less fortunate.  Keep them all in your thoughts and prayers as you give thanks!

One of my greatest regrets this year and indeed of my life is missing my friend Liz's wedding in Puerto Rico this past July.  For financial and other reasons i just couldn't swing it, but in hindsight i should have tried harder.

Fortunately Liz is a forgiving soul and allowed me to ask her some questions about how her family in Puerto Rico was faring in the aftermath of Hurricane Irma and Hurricane Maria.  Here were her responses not quite verbatim:

Her Grandfather (abuelo) is very sick with an incurable lung disease and has to use a breathing treatment machine to help him breath.  That machine requires power which is in short supply.  They have generator power, but it was flooded during Hurricane Maria.  This required him to climb up and down stairs to plug in his machine.  The generator has been repaired and is currently working, but it must power a very tall building so the residents are not allowed to turn on their air conditioning.

Her uncle just got power back, but it is intermittent.  He lives in a tall building in San Juan that swayed so much in the hurricane that the walls started cracking and the caulking around the windows failed causing rain water to flood the apartment.

The lobby of the hotel where she was married was flooded and her cousin's wedding had to be postponed due to the hurricanes.

Her family would like to leave the island and there are many who have fled or are already fleeing.  She said that Puerto Rico has struggled with corruption for years and that the hurricanes just exacerbated an already dire situation.

I was sad to hear that her family like so many others in PR were still struggling for survival and to fill basic needs.  I was also disturbed to hear that corruption has been so rampant for so long there.  That said, we owe it to our fellow Puerto Rican American citizens to help them rebuild and hopefully, build better than before both in infrastructure AND institutionally.  Puerto Rico must rise again!

To that end, a HOLA and East Tennessee for Puerto Rico is putting on a benefit concert at the Knoxville Museum of Art on Dec. 5th.  Tickets are $50 and includes food and beverages with proceeds going to directly improve the lives of those in harms way in Puerto Rico.  I've attached a flyer with more info below.  Please attend if you are able.

Lastly, i like many other Knoxvillians had to deal with the hassle of an internet and cable outage for almost 4 whole hours this past Sunday night.  I thought to myself, "Man this sucks!  No one should have to live with this kind of inconvenience!"  I caught myself.  "Seriously?!  I'm upset about not having internet for a few hours while at least 50% of the population of Puerto Rico has been without power for over two months?"  Really puts things into proper perspective. 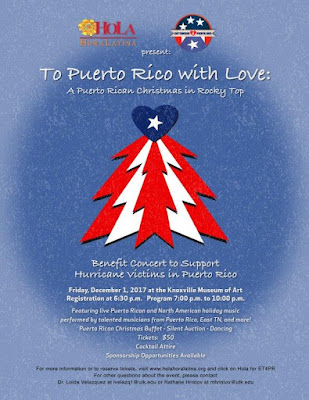 
If you've not been paying much attention, you might not have noticed that the Republicans in Congress are trying to ram through yet another gigantic tax cut for the wealthy and is again trying to convince middle and low income people that this will benefit them.  This is a lie!

If you haven't seen how this story plays out, let's just take a trip down memory lane to the last time they convinced us this was a good idea.  If your memory fails you, it was during the 2nd Bush administration and it was not just one but TWO tax cuts that mostly benefited the top 10% of the wealthiest humans on earth.  Those tax cuts turned a surplus at the turn of the millennium into a decades long run of deficits with no end in sight and has led to even greater income inequality.

And now, here we go again with the same old tricks.  "Lower taxes on the rich will lead to higher incomes, increased growth and blah blah blah trickle down economics" says the Republican Congress and the White House.  In fact, Gary Cohn used the exact words "trickle down" in his attempt to sell this load of horse manure last week!  At least have the good sense not to use the phrase synonymous with the biggest economic lie ever sold to the American people.

Tax cuts for the wealthy have NOT led to increased wages and growth.  In fact, it has been quite the opposite.  In the last 30+ years as the top income tax bracket has gone from 50% down to 39.6%, the income inequality gap has exploded!

Oh and not to mention our national debt has skyrocketed as well.  Can someone please explain to me why Republicans care so much about debt and deficits when a Democratic president is in office, but seemingly don't even know they exist when a Republican occupies the White House?  Are we supposed to ignore the fact that their tax cut plan will add an additional $1,500,000,000,000 ($1.5 trillion!) to the debt over the next 10 years?  "Oh we'll recoup that and then someone through additional growth in the economy" they say.  Oh really?  How well has that worked for us in the past?  Last time i checked we're hovering around $20 trillion in debt, $19 trillion of which has been added in the last 30 years!

So at Thanksgiving dinner this year, if your ultra-conservative aunt tries to tell you that lower taxes on the wealthy will somehow magically materialize into astronomical wage growth and less income disparity between the wealthy and the rest of us, i want you to look her in the eye and ask her why this time will be any different than the last several attempts.  After you've done that, pick up the phone and call your senator and tell him or her to vote NO on this latest iteration of the greatest lie ever told.  I know it's the holiday, but leave a message.  I promise someone will hear it!

For those who want to have a little more ammo for that discussion with your aunt, here's a link to a great video that should help and if that's not enough, here's a very good article on the subject.  Good luck and don't forget to let your voice be heard by calling your senator!


There are those of you who absolutely LOVE EDM (electronic dance music for you squares!) and those of you who loathe it.  I fall somewhere in between although probably closer to the lovers than the loathers.  This particular EDM artist i think could have something for both camps in my opinion however.

It's a group called Arms and Sleepers and they are kind of a mix of EDM and soul trance or as i like to refer to it as soul trance dance (trademark pending! :-)).  They have a lot of hip hop elements too (is hip hop soul trance dance too long a genre description?).  Their album (more like a long EP) Miami is one of my favorites in the "genre" and i've been feasting on a steady diet of it for the last several months.  It's a groovy little work of art and has an odd way of mellowing me out while also giving me a boost.  Anyhow, check it out for yourself and you'll see what i mean.

Song- The Moon- Arms and Sleepers


My song of the week is by the same artist but on a different album (Life Is Everywhere, another fantastic record!), but it's probably my favorite track by A&S.  It's called Hollow Body Hold and features hip hop artist Serengeti.  The track is about a famed fictitious Olympic athlete named Steve Moon who competes and medals in two different sports at two different Olympics.  Check it out here if you're in need of a groovin' pick me up!

There are no words to describe how ridiculously stupid this is so i'm not even going to try.  Feel free to take a stab at it yourself though!

Tip- Get Some Sleep!


Did you know that deadly car accidents spike the week after we "spring forward" for daylight savings time every year?  Why is that you might be wondering?  Well, it's not hard to figure out if you're like the millions of Americans who don't get enough sleep at night!

The one piece of advice i feel like i'm always reminding my clients of is the importance of getting a good night's sleep because so many people don't.  Lack of sleep not only leads to an increase in the likelihood of a deadly car accident, it has also been linked Alzheimers disease and Type 2 Diabetes!

So please folks, do yourself (and everyone else for that matter!) a favor and try to get 8 hours of every night.  It will help your cognitive abilities, your mood and decrease the likelihood of bad sh!t happening to you.  Still not convinced?  Here is one more article that should seal the deal on the benefits of getting more sleep. Take care of yourselves, y'all!

You always get what you want through your charm and personality.

Happy Thanksgiving everyone and thank you for reading!