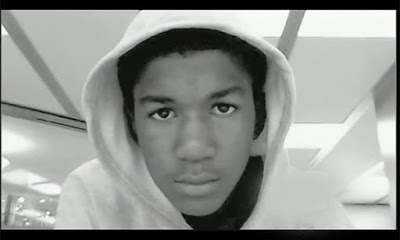 I wasn't always a member of the hoodie culture.  In fact, i didn't own a hoodie for many years never really considering them "my style."  And then i started working for a company where almost everyone wore hoodies at some point or another.  It's amazing to me how quickly i acclimated to this stylistic preference soon having 3-4 hoodies in my regular wardrobe rotation.

And then brother Trayvon Martin was killed wearing a hoodie on his way home from the store late the evening of February 26th, 2012 in Sanford, Florida.  I couldn't believe this young man would be gunned down so senselessly because he had the audacity to walk through a quiet suburban neighborhood.  The hoodie made him look suspicious George Zimmerman would later claim as he defended his indefensible actions that night.  Although Trayvon was unarmed, he apparently still presented a threat to the armed Zimmerman and therefore had to pay the ultimate price of his life.

George Zimmerman was later acquitted for his crime on the basis of self-defense and Florida's "Stand Your Ground" laws and i was fearful that we as a society had crossed into dangerous territory.  How could someone claiming self-defense shoot an unarmed kid and get away with it?!  Had we as a society just condoned the murder of a young man for being black and wearing a hoodie in the wrong neighborhood?  Did this mean all black men should fear for their lives for wearing the wrong clothing in the wrong neighborhood?

It didn't dawn on me until several months later that i myself should be more conscientious in my selection of clothing. "You should be careful wearing that hoodie around, man." a good friend of mine said to me one night a couple months after Trayvon's murder.  He said it half in jest, half in all seriousness, but genuinely concerned that i was putting myself in harms way.

It hadn't occurred to me before then that i would have anything to worry about.  I'm a law-abiding, contributing member of this community.  How could anyone think of me as a threat?  Then i realized, oh yeah, not everyone knows me personally and even if they do, they may not recognize me in the dark wearing a hoodie.  From that point forward i have been extremely self-conscious (and maybe a little paranoid) whenever i wear a hoodie especially at night.

But that hasn't stopped me.  Now i wear my hoodie is a show of solidarity.  I stand proudly with all of the men, women and children who despite the dangers wear their hoodies courageously and without fear.  Every time i put on a hoodie and walk outside my door, i am paying tribute to my little brother Trayvon who's life was cut short (he was only 17) for having the nerve to wear his on that fateful night 6 years ago.

I didn't know Trayvon personally, but i feel like i know him better than most.  He is the little brother i never had and his spirit will forever live within me.  His life and sacrifice will not be forgotten.  In light of the most recent tragic events, i'm reminded of that sacrifice he and so many others have made unknowingly in the name of change and progress in America.  Why do so many lives have to be lost before we decide as a nation that we've had enough?  Why does so much blood and tears have to be shed before we as a nation decide enough is enough?

To brother Trayvon and the 17 who recently lost their lives in Parkland, i say rest in peace.  Your deaths were not in vain. #putthegundown

Who Was Trayvon Martin

Trayvon Martin was born on Feb. 5th, 1995 to Sybrina Fulton and Tracy Martin.  He was athletically inclined, interested in aviation and had aspirations to one day become a pilot or become an airplane mechanic.  He washed cars, loved playing sports video games and played football from ages 8-13.  At age 9, he saved his father's life during a fire in their apartment.

Trayvon was an average student and had been suspended from school on a few different occasions.  He was serving a 10-day suspension for possessing a marijuana pipe and an empty weed bag at the time he was killed.  He was described as a shy kid and was often seen wearing a hoodie listening to earbuds even in the summer.

By all accounts he was a fairly typical high school kid.  Like many other kids his age, he had his issues and seemed to be strugglingly to figure out what he was going to do with his life.  It breaks my heart he wasn't given the chance to grow up to become the man he could have been.

Is it just a coincidence that Trayvon's murder, the Orlando night club shooting and now Parkland all happened in the state of Florida?  Not if you know anything about current Florida governor Rick Scott who's planning a run for the United States senate.  He's been closely allied with the NRA for years (he received their highest rating of an A+) and was recently slated as a keynote speaker at an NRA event scheduled for later this year.  He surreptitiously opted to back out of that speaking engagement.  I wonder why?  If you're reading this blog and you live in Florida or know people who do, please take notice of Governor Scott's very gun-friendly policies and ask yourself, is this really someone you want representing your state in the Senate?  Oh yeah, and he doesn't believe in climate change either.

Children Are The Future

I've been extremely encouraged by thoughtfulness, strength and courage of this country's young people in the wake of the Parkland tragedy.  I can't begin to explain how impressed i've been with how articulate, steadfast and unwavering many of them have been in forcing the discussion about guns in this country.  These aren't just the leaders of tomorrow, they are leading today and they give me hope for the future of this nation and the world.  Lead on young brothers and sisters, show us the way!

5 months after Hurricane Maria, Puerto Rico is making progress, but is still painstakingly slow.  As of Feb. 13th, 16% of Puerto Ricans (some 400,000 citizens) still had no electricity and while running water has been restored to 99% of the population, many still languish without reliable housing, hundreds of roads and bridges remain impassable and many businesses are still closed.  It is estimated that between 400 and 500 thousand people could flee the island by the end of the year following an exodus of approximately 300,000 in the immediate aftermath of hurricanes Irma and Maria.

Aid from the federal government continues to be insufficient.  The government of Puerto Rico requested $94 billion in aid for rebuilding and recovery and will likely only receive a third of that request... at best.  Massachusetts senator Elizabeth Warren visited the island in January and had this to say:

"Outside San Juan, we visited Concilio de Salud Integral de Loíza, a community health center. The director said they were the only emergency room and health care provider for a region of nearly 100,000 people. Power lines are still down. The center is on its fourth generator (the first three burned out). And they count themselves lucky. The families they serve have no power, the water isn’t drinkable, and, for many, their homes still have no roofs and, in some cases, no doors or windows. We visited a shelter called Canóvanas where 21 families, from grandmas to small children, have lived for months...

Friday morning we talked with volunteers from the Massachusetts State Police who are assisting local police with everything from directing traffic to solving murders. FEMA has a huge operation on the ground, and its volunteers and personnel have approached every job with enthusiasm and determination to help.
But even federal help has huge problems. Because they are constrained by law, the Army Corps of Engineers is spending money to rebuild a senseless, antiquated power grid that requires Puerto Rico to import fuel instead of updating their system with renewable energy sources. Congress ignores Puerto Rico’s huge debts – debts that discourage any long-term investments in the island. Large parts of the island remain inaccessible, and no one knows when they will have reliable power and clean water.
There are dedicated and determined people in Puerto Rico, and some terrific workers from the mainland. But my bottom line: It’s just not enough. The need is enormous, and the response from our federal government has been too little too late."

I read a great article in Businessweek (a pretty long read, but worth it!) about how to address PR's myriad issues.  The biggest takeaway is that the people remain resilient and are clawing and scratching for their own survival and the survival of the island with the help of some genuinely concerned private citizens.

I watched a video promoting Puerto Rico as a tourist attraction from the 1950s.  Check it out here.  It's... fascinating?

Here's another video showing how a group of climbers are helping the recovery in Puerto Rico and discovering parts of the island they had never seen before.  It's truly inspiring!

Bottom line is the recovery in Puerto Rico is underway, but is still at least 12 months from returning to its former self. And unfortunately the recovery is being hindered by the limited response from the federal government.

I haven't done an OTM in a while. In such a long time in fact that I forgot that i had renamed it "OTM" (Of The Moment) instead of the original "OTW" because of my seeming inability to keep up with my blog on a weekly basis as i had intended. ;-) So i figured i should bring it back and in honor of the release of Black Panther, here's a comic book centric OTM.

There's a lot of competition between the Marvel and the DC comic book universes, a multi-verse showdown as it were. If i were forced to pick one or the other, i'm not sure where i'd land although if i could choose one for the big screen (Marvel) and one for the small screen (DC), that would be the best of both worlds.

To wit, I watched a 4-episode DC crossover event on the CW that included 4 of DC's most popular superhero shows including Supergirl, The Flash, Arrow and DC's Legends of Tomorrow.  It was AMAZING! I was blown away by how incredibly well-done all 4 episodes were cleverly interwoven into one coherent storyline rivaling anything you might catch on the silver screen.  That said, this was kind of a one-time thing, but that doesn't mean each of these shows are worth watching as standalone series.

So my "Of The Moment" recommendation is to tune in to all 4 because they are all humorously well-written, the actors are top notch and there's plenty of @ss kicking action too.  Personally my favorite of the 4 is the Flash (I LOVE Grant Gustin!), but you really can't go wrong with any of them. In the meantime, if you're into comic book superheroes like me, all of these shows will allow you the escape from reality we all need every now and then.  BTW, has anyone seen Black Panther yet or watch Black Lightning?  I'd love to hear your reviews!

"A great pleasure in life is doing what other say you can't."