A message from an American Citizen:

What do you MEAN you won't execute the order?! You signed the sanctions bill passed by the Congress of the United States of America meaning you committed to the execution of the order. You as Chief Executive don't have the right to ignore an order given to you by the people's house unless by veto. If you choose not to follow orders, you are in breach of your constitutional responsibility to faithfully execute the laws of the United States of America whether you like them or not. But to decide without the constitutional authority to do so that you won't enforce sanctions passed into law by congress and signed by YOU isn't a right you have as president of this democracy. (See Article 1, Section I of the US Constitution)


Folks don't be distracted by the Nunes memo or the sideshow of the week the White House is producing. It is only meant to distract from what is at best a dereliction of duty and at worse a blatant attempt to upend our system of democracy all in the name of support for the murderous and corrupt Putin regime. Don't be fooled!

To me, it is quite obvious what is taking place and at this point the US Congress is complicit. Either they will act in defense of the constitution or may they forever be remembered as an accomplice to the undoing of the very fabric of our nation. (See Article 2, Section 4 of the US Constitution)

Oh yeah, and then there's this!


If you haven't read part one of this adventure, start here.  And if you have, thanks for keeping up!

I left for Asheville later than anticipated because i was suffering a class 3 hangover from the soft opening festivities. Otherwise the drive was pleasant and remarkably beautiful. The leaves on the mountain trees made the entire drive picturesque and i basked in the glow of all of the fall colors on full display. #leafporn

I arrived in Asheville about an hour and half before the show and went straight to the hotel to drop off my car. The hotel we were staying in was called The Mountaineer Inn and let me tell you, this place is special and i mean that in the best possible way! Between the old school neon signs and the eclectic collection of temporary residents, it was just the right place to begin the evening. 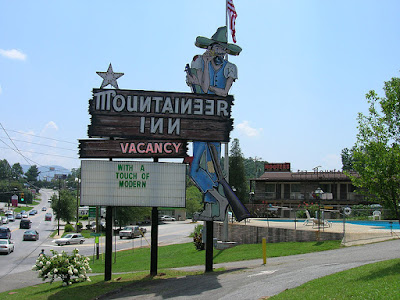 As soon as i parked and settled at the Mountaineer, i called an Uber.  I jump in the front seat of a Toyota Corolla 10 minutes later and after a little hassling over the GPS, my driver and i made our way downtown where my FMC were having a drink at a place called Isa's.

As soon as i see their faces, my heart fills with joy! This couple always make me happy because i associate them with so many fun memories especially Forecastle memories. (On a side note, if you've never been to Forecastle, you should!)  There was also that feeling of relief that everything was aligning perfectly.  Despite the different paths we took to get there, we all landed in the same place at the same time in space and it was truly a surreal moment of beauty, love and pure ecstasy.

We sipped some cocktails as we gushed about how excited we were for the show and they shared some of their stories of conquest of downtown Asheville from earlier in the day.  After we finished our drinks, it was a rather short walk to the venue (the US Cellular Center) and found it surprisingly easy to get in. I had been to this venue at least half a dozen times so i kind of knew what to expect, but that was unexpected. I assumed that meant there wouldn't be that many people there. My FMC weren't too familiar and were blown away by how large the venue was.  They were expecting a Tennessee Theatre-sized venue at best i think.  Boy were they in for a surprise!

With first show beers in hand, we moseyed to an easy spot on the GA floor and HOLY SH!T were there a lot of people there! I knew it was a big place, but had no idea that alt-J would have enough fans to fill it. I WAS WRONG and couldn't have been happier to be wrong in my life. Alt-J is one of my favorite bands and to know they have so many fans warmed my heart!

Just as we found our spots, stage left about 75 feet back, the band came on and wowzers, what a show they put on! The light show was simple, yet effective and the sound quality was dialed in perfectly. They played several songs off of their newest album Relaxer and quite a few from their 2nd album This Is All Yours and maybe 2 or 3 from the first album An Awesome Wave which admittedly i haven't listened to that much. They played my two favorite alt-J songs back to back (Nara and Deadcrush) early in the set and i was levitating.  How do they know me so well?!

When the show finished, we were all clearly jonesing for more. Was that really it? That may well be our one and only complaint.  Give us more alt-J!  When the lights came up we knew it was time to go and while we were disappointed it didn't last longer, we were all satiated with the show they put on.

We decided to bask in the glow of a great show by night capping at this neat France-styled wine bar in the middle of downtown Asheville across from a little bodega. We chilled on the patio watching people wander pass and eventually found our way into a Lyft. We got back to the hotel room, grab some beers and drank Four Roses into the wee hours of the night jamming to alt-J, Dave Matthews Band and Glass Animals. It was a great ending to a great night!

We got an extra hour sleep because of daylight savings time, but it still wasn't enough. I had another killer hangover (this one was a class 4!), but we eventually made our way into another Lyft to head back downtown for brunch. This particular driver wasn't fond of using his brakes until the very last possible moment and wasn't particularly big on conversation either, but he had the best line of the trip. "I'm already committed" he said as he continued down the street where the restaurant was instead of dropping us off at the corner as we had recommended to save him time. FMC and i had a nice little laugh about that as we hopped out of the car and into the restaurant(guess you kinda had to be there to appreciate the humor?).

We filled our bellies with biscuits, grits, steak and eggs, and bacon among other things and then popped into another Lyft back to the hotel. We got back to the Mountaineer bummed that the trip was coming to an end, said our good byes, got in our cars and hit the road back to Knoxville. I followed them most of the way back.  It was the closest thing we could get to riding together and it was a tremendous help because i was still a bit shaky recovering from the 2-day bender.

The scenery was just as beautiful on the way back as i enjoyed alt-J, The Black Crows and FKA Twigs on the six-disc changer. It's these kinds of weekends that make life so worth living i thought myself as we wound our way back to Knoxville and to reality reminded that love IS the warmest color! 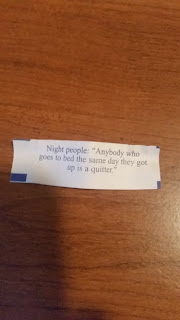