Hail To The Chief... Kanye West? 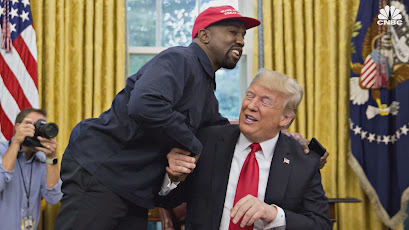 So Kanye West has thrown his MAGA hat in the ring for president.  This comes as no surprise to anyone who's seen Kanye's mental state slowly but surely deteriorate over the years, but nonetheless there still seems to be those willing to entertain at least the thought of a Yeezy presidency.  To them I offer the following analysis.  Kanye is ALREADY in the White House!

They both think of themselves as geniuses, neither is good with money (i know about Kanye's poor financial management personally btw.  Hit me up sometime when i've had a few and i'll tell you all about it!) and they both have a penchant for exaggeration or outright lying.  They both love talking about themselves oftentimes in third person and they both like bragging about how great they are.

Kanye NEVER misses an opportunity to b!tch and moan about how poorly he's treated by everyone.  Does that sound like someone else we know?  He doesn't let pesky things like "facts" cloud his unimpeachable judgement.  Hmm, we're getting warmer.  He thinks black people are cowed and brainwashed by the liberals.  Sound familiar?

But most importantly both Kanye and Trump have this in common.  They are both delusional about their chances of winning in November, but only one of them has any real shot a victory... and it ain't Donald Trump!

There is one key difference between the two however.  Yes, you guessed it.  At least Kanye is willing to admit that he's mentally ill.

Oh and BTW, Jared, i don't know if you know this or not but we can see you.