My Message To Lamar 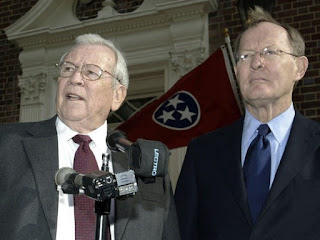 Mr. Alexander, my name is Oslo Cole.  I am a lifelong resident of the state of Tennessee, a proud graduate of the University of Tennessee and former member of the Pride of the Southland marching band.  In my 40+ years as a Tennessean, I have always known you to be a man of honor since I was old enough to know your name.

As I was growing up, you served two terms as governor of our great state and despite our political differences, my family and I thought you were an superb governor.  Not because we always agreed with you politically, but because you were a good, decent, honest man and because you always did what was right.  Now, as our senior Senator, you've served with distinction and earned the respect of your peers because you understand what's right is right and because you've always put country over politics.

Now I'm asking you to do the same thing again by allowing witnesses to testify in the impeachment trial of Donald J. Trump and for documents to be subpoenaed.  You need the relevant facts in order to make the most informed decision as to whether Mr. Trump is fit to continue to serve as president of these United States.  We as Americans need those facts as well.

Another honorable man from the state of Tennessee who served in the Senate during Watergate faced a similarly difficult decision as a loyalist to President Nixon.  He didn't want to find out that the man he had supported for so long had corrupted the office of the presidency, but he understood that his duty was to his office, his country and the constitution, not to one man.  I implore you to follow the example set by Howard Baker by allowing the facts to determine your course, not party loyalty or your friendship with your colleagues in the Senate.

I sincerely hope that you will rise to the occasion and live up to the high level of honor me and so many others in the great state of Tennessee have bestowed upon you.  I hope that you will support the full finding of facts in this matter and use them to guide your path.  Anything less would represent a miscarriage of justice and fly in the face of the reputation you've built for doing the right thing even when it's difficult.  We as citizens of the Volunteer State have always had to do that on behalf of our country.  This time is no different.

I hope you'll be the man of honor I've always known you to be and vote in favor of hearing witnesses and seeing documents.  I have faith that you will do what is right yet again.

Sincerely,
Your Constituent
Oslo Cole
Posted by Oz at 1:31:00 AM