Puerto Rico: The Fight For Survival + A Trip To See alt-J + OTM

Puerto Rico: The Fight For Survival

I had the honor of speaking with Loida again about the progress in Puerto Rico. For those of you who don't know Loida Cardona Velasquez, she is a project director at UT and all around bad @ss.  She is originally from Puerto Rico and she and i serve together on the United Way of Greater Knoxville Board of Directors.  She also serves as the media liaison for the East Tennessee For Puerto Rico group and has been my primary source for information about the recovery efforts in Puerto Rico.

When I called, Loida was home recuperating from surgery on her ankle, but was in otherwise good spirits. She reported to me that after 60 days, her brother now has electricity! She said she's able to speak to him regularly and that she no longer has to send him food.

On the down side, he's able to send pictures on a daily basis of the devastation that struck the island and more specifically those of her hometown. She said that most of the roads around her hometown of Arecibo are still washed out and it breaks her heart to see the place she grew up in such poor condition. She said that things are improving, but that progress is painfully slow. She said at the current rate of recovery, it'll take at least two years for Puerto Rico to return to a semblance of what it once was.

She also said that the people who live in the mountains are suffering the most. They were the poorest communities before the hurricanes hit and therefore have recovered much more slowly than other parts of the island she explained. They're the communities still most in need of tarps even to this day.

She also verified that many people are continuing to flee the island mostly to Florida because it's the closest, but also to larger cities and other parts of the country including the southeast. She said that a lot of the people who are leaving are professionals and that it will take longer for the island to recover because of that.

She also shared more information about her hometown Arecibo which rests in the northern coastal region of the island. Arecibo had a population of 60,000 at one point, but due to a loss in federal tax incentives, the pharmaceutical industry which had been a large presence there, moved their operations to Mexico. This led to the population diminishing. She said sugar cane is also a source of income for that area and that growing up, she had sugar cane crops in her backyard.

Lastly she reported that the East Tennessee for Puerto Rico fundraising event a the KMA went better than expected. They had been anticipating 150 in attendance, but that over 200 people showed up. Knoxville is truly a caring community! She said everything for the event had been donated with the exception of food so they were able to raise quite a bit of money. At this point they're trying to determine how the money could best be spent to help Puerto Rico get back on its feet.

I was glad to hear from Loida that things were improving, but sad to hear that the progress is very slow and is very uneven. The fight continues!

BTW, if you're in the giving mood this season and want to help the recovery efforts in Puerto Rico, you can send donations to:

or by visiting Unidos Por Puerto Rico.  Thank you!

On a related note, i must ask WHY congress is spending it's last couple of weeks of the year working on tax breaks for corporations and the wealthy who definitely don't need it and not working on improving the lives of its citizens. The more i think about it, the angrier i get! Paul Ryan, Mitch McConnell and Mr. Trump, are you seriously more concerned about repaying your donors and helping your already rich friends than you are about the lives of American citizens? Outrageous!

A Quick Word about Taxes and Net Neutrality

So you've probably already heard that Republicans have forced through a massive tax cut for the wealthiest Americans and corporations (fiscal responsibility my @ss!) and that they've also repealed Net Neutrality. I don't know about you, but it seems quite obvious to me who they represent. I'll give you one guess as to who that might be and i'll give you one hint: it isn't everyday working Americans. Once you've figured out who, you'll know who to vote for in the 2018 mid-terms. And that's all i'll say about that. 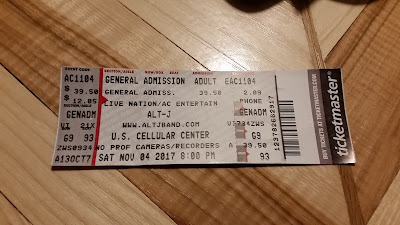 I have waxed poetically on this blog about my love for alt-J.  Arguably they are my current reigning favorite band.  So when i received an e-mail from the AC Entertainment e-mail list saying alt-J was going to be in Asheville on Nov. 4th it wasn't a question of if i could make it happen, it was a question of how!

To be completely forthcoming, I had heard tale of this show in passing from my favorite music couple (FMC), but had forgotten to take note of when.  This is the same FMC i've been to the last two Forecastles btw, and with whom coincidentally, i also share a mutual love for pro wrestling, but that's another story for another day ;-)) I took a chance and asked if they were planning on going to the show.

They responded that not only were they going, but they already had their tickets, a hotel room and even offered me a ride.  Perfect! All i needed now was a ticket.  Easier said than done...

I decided i would buy my ticket a few days in advance of the show to be sure it didn't sell out. The face value ticket price was $37 which i considered VERY reasonable, but after Ticket Master fees, the final price came to a whopping $57! Seriously TM, a 54% markup?! I understand that they have to make their money, but c'mon man, that's outrageous even for them! So outrageous that in protest, i chose to wait to buy my ticket and when i did finally decide to bite the bullet the day before the show, TM would not process my order. Let the outrage continue!!!

I wasn't gonna give up though, i was going to this show come he!! or high-water. I decided to call the box office and ask if tickets were still available. Not only were tickets available, i discovered that i could buy a ticket directly from the BO for $45--- $12 cheaper than TM online! Really TM, unbelievable!  Anyway, only issue now was that the ticket would have to be bought in person which proved to be a rather minor inconvenience.  FMC was already in downtown Asheville so they swung by the BO and voila, i had my ticket into the show!

I had only one other obstacle to overcome. The soft opening of Elkmont Exchange was happening the night before the show which i also did not want to miss. FMC was heading to Asheville that afternoon so i wasn't able to take advantage of the ride to and from. No bother, i was fine to drive myself if it meant i got to see the elusive alt-J.  I was NOT gonna miss this show!

For the first time EVER in the history of the OTM, the stars have aligned and has placed all 3 of my standard music recommendations squarely in one artist's column. That artist is none other than Jukebox The Ghost, an alt-rock (not to be confused with alt-right! ;-) outfit out of (ironically enough) Washington DC. Easily the best thing to come out of Washington all year! Hahaha, i'm not kidding! These guys aren't new though, they've been a band since 2006 and the album recommendation isn't new either. It was released in 2012 and is called Safe Travels.

While the entire album is good... no GREAT!, there is one song in particular that jumps out at me. It's called "All For Love" and spoiler alert, it strangely enough isn't really a "love" song. It's also arguably a power ballad which makes all the more unique... well that and the jingle bells too! :-)) Such a phenomenal track on a phenomenal album by a phenomenal artist.

Final thought on JTG. There's something to said for an artist that's been around for this long and has a catalog chocked full of great music. I know from experience that it's tough to stick with it so i have a tremendous amount of respect for these guys. You have to really believe in the music your making to want to stick it out and judging only by this one album, i'd say they have a lot to believe in. Can't wait to listen to more of their stuff. Will let you know how it is, but in the meantime, check out this one. You'll be happy you did!

If Ticketmaster, the repeal of Net Neutrality and the Republican tax plan didn't give you enough to be outraged over, here are a couple of links to articles that should fill the void nicely.  Remember to outrage responsibily! More outrageous, most outrageous!

Of all our human resources, the most precious is the desire to improve.
Posted by Oz at 4:42:00 PM