The best book i've EVER read 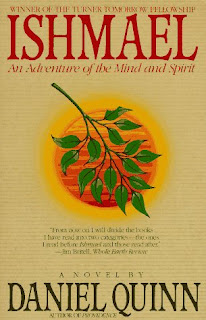 **Please note, this isn't a book written specifically for job seekers and/or small business owners.  That said, it could help you gain a different perspective on the world which i think is always good for anyone where ever you are in life!**

I just finished rereading the book Ishmael by Daniel Quinn.  In fact this is the first and only book i've ever read twice.  The first time i read it was about 7 years ago and thought i should read it again since it had been so long.

It was a wise decision because i got so much out of it the second time around!  I remember enjoying the book and it having a profound effect on me, but now having read it again, i understand why.

Ishmael isn't a traditional novel.  In fact it is difficult to describe it as fiction although the characters are most definitely fictional.  It doesn't even really come across as a work of non-fiction either.  It's one of those books that like Da Vinci Code takes elements of non-fiction and repurposes those elements to tell a different truth.  Unlike Da Vinci Code however, it isn't nearly as theatrical.  Most of the book consists of a conversation between the two main characters.

It's hard to imagine a story told that way holding one's attention, but Ishmael manages to do just that by presenting some of the most thought-provoking ideas i've ever heard or read.  These eye-opening ideas will get your mind working in ways you won't believe.

Some critics of this book say that it makes too many generalizations, that its science is flawed and that it's just another piece of liberal propaganda.  Those who find the book even the slightest bit compelling still think it lacks in substantive solutions to the issues it raises and others complain that the writing is poorly done.  I'm not here to argue against any of those critiques because there is probably some merit to each.  What i am here to argue is that despite its flaws and short-comings, it is still a book not only worth reading, but one that absolutely should be read.  Why?  Because it provides a different view of the world, of our culture and our civilization that, in my opinion, we so desparately need.

You can find Ishmael on amazon.com fairly cheap or you can check it out at your local library.  He!!, i'd even be willing to loan you my copy (for local Knoxvillians only :-)) if you can't get it any other way, but do yourself a favor and read this book.  It might very well be the best book you've ever read too!

BTW, if you have read this book, please post a comment with your thoughts about it if so inclined.  I would love to get a discussion started about it here on the BlogOzPhere!

Email ThisBlogThis!Share to TwitterShare to FacebookShare to Pinterest
Labels: Books, The Adventures of Oz

I 2nd the statement, "It might very well be the most important book you've ever read!"

I learned of Ishmael when a friend of a friend I had just met, told me this book changed his life. My philosophy is if someone I like tells me that, it's the next book I read.

Oddly enough, that was about 7 years ago... sounds like it's time for me to reread!

I think you might be right, my friend. It was even better the 2nd time around and 7 years later.