My Coming Out Story Part 1 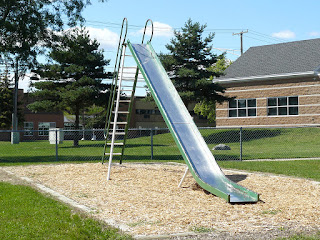 Allow me to preface this post by saying the sooner we get to the point in our society where "coming out" is passe and unnecessary, the better.  I'm pleased to say we've made a lot of progress in the last 10 years in that direction since i officially came out to the world, but we still have a ways to go.  My hope is by telling my story, it will make the ground safer to walk on to just be who you are without feeling the need to explain yourself to anyone else.  As long as you're comfortable being you, that's all that should matter, but alas, we're not quite there yet so here we go!

I was pretty young when i realized i might not be totally straight.  I drew the conclusion after having some weird feelings about certain guys i interacted with in my neighborhood and at my school at the ripe old age of 7ish.  There was one kid in particular who i'll call Jack (not his real name) who i used to play with at our apartment complex near the campus of Memphis State (now University of Memphis).  I remember him always wearing blue jeans and he NEVER wore a shirt that i can remember.  He had moppy brown hair (think early Bieber-style) and sparkling blue eyes.  He was as a prototypical "boy".  He liked playing in the dirt, running around and rough-housing.

We were the same age, but in every way, he was stronger, faster and tougher than i was.  (He once outran me while i was going top speed on my bike if that gives you any idea.)  He was superhuman in my mind.  But we were friends AND we were rivals.  At the age of eight, i remember jumping off the top of the slide in an effort to beat him back to the ladder to get back on the slide.  I was trying to impress him.  As i did, i landed awkwardly on my right arm and it broke.  I had to wear a cast for a couple of months.  I never told my parents the real reason how that happened.  I was trying to protect him.

On another occasion sometime before or after that incident (can't remember which came first), we were pretending to be ninjas at the community center in the apartment complex.  He flung me over his shoulder like a ragdoll onto the hard linoleum floor and i landed square on my forehead.  I immediately began crying (i was a real wuss!) and ran home.  He ran after me apologizing profusely for it -- he genuinely felt so bad for causing me to bump my head.  I got home and my parents asked me how i got hurt.  I told them i fell and as i was telling that lie, there was a knock at our back door.  It was Jack coming to apologize and explain to my parents what actually happened.  I slammed the door in face.  I didn't want my parents to know he was responsible for my injury.  Fortunately i didn't have to take a trip to the emergency room that time!

Why i felt the need to protect him, i'm not quite sure, but most likely it was because i was afraid my parents wouldn't let me play with him anymore.  I couldn't have that and in hindsight i now know why.  He was my first true love. 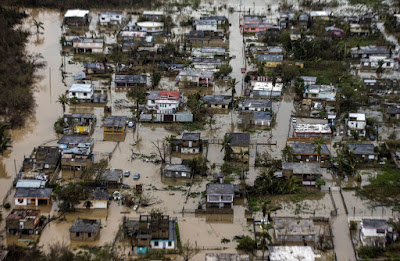 If you've not been paying close attention, there is a serious humanitarian crisis unfolding right here in the United States of America. Our countrymen and women are under great distress and are desperately in need of our assistance. I'm speaking of Puerto Rico if you haven't already guessed.

While Hurricanes Harvey and Irma wreaked havoc on the great states of Texas, Louisiana, and Florida among others, Maria probably caused more devastation than both of those storms combined. The entire island of PR is without power and the majority of the island is without water. They need our help and fast!

Priority #1 however is raising awareness and getting our representatives in Washington to act swiftly to prevent this crisis from turning into a full-blown catastrophe.  Please contact your senators and congress people and tell them to act NOW in approving the necessary aid to help our fellow American citizens regain stability.  If you aren't sure how to get in touch with your representatives, click this link and type in your zip code.  NOTHING congress is working on right now is more important than this! 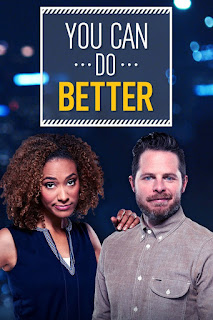 Song(s)
I have two songs of the week this week. The first is by SBTRKT who you might recall was on last week's Spotify playlist. This song is off his newest album and it's called "I Feel Your Pain". If you need a kick in the @ss, this is the song for you.  It's a dose of tough love!

The second song is by The Mars Volta and is called "Meccamputechture" of the album Amputechture. If you haven't ever listened to The Mars Volta, get ready to have your mind blown.

Spotify Playlist
alt-J- RELAXER This is alt-J's 3rd album and dare i say their best? alt-J knows how to push the envelop musically and lyrically even if sometimes their meaning can hard to decipher.  I don't f*cking care! Put this album on if you're trying to rage... hahaha, just kiddin'. This one will definitely chill you out if current events are stressing you out too much. Coincidentally, if you're trying to rage, The Mars Volta is a d@mn fine choice!

DVR Show
If you're into edutainment, look no further than "You Can Do Better"! While i really enjoy "Adam Ruins Everything", i find YCDB puts more of the "tainment" in edutainment and is just plain laugh out loud funny. Author Matthew Latkiewicz and comedian Abbi Crutchfield host this show and they are a perfect 1-2 punch. They play well together and have a great on-screen chemistry. The writing is hilarious, the life hacks are legit and they take on a number of unique and interesting topics such as You Can Do Better At Sex or You Can Do Better at Drinking. The latest episode, You Can Do Better At Work, may very well be the best episode yet! Click this link for a preview.

Youtube Channel
I found this YT channel by accident (if you consider a YT ad an accident!), but d@mn i was glad i did! Baker Daily might very well be the funniest thing on the internet right now. Be leary if you're queasy about politics (especially if you're a Trump supporter) or humor without a filter.  Otherwise here's episode 1! 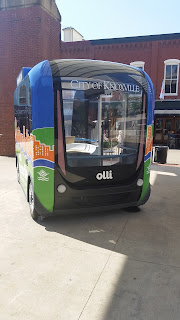 So i was plucking around downtown Knoxville and came across a couple of interesting transportation options from the FUTURE! One is the cool autonomous vehicle "Olli" and the other is this awesome skate board looking thing. You can read more about "Olli" here. As far as the closest thing to the "Back To The Future" hoverboard, it's called a "Onewheel+" and i had the pleasure of speaking with the owner of this particular model.

He told me he's the first in Knoxville to have one, but that they're really catching on in California. He said he can travel up to 8 miles on one charge (yes, it's motorized), can reach speeds in upwards of 20 MPH, and it's a lot like riding a snowboard. He also has an app for it where he can track his mileage and see how fast he's going. It's a pretty sweet ride, but if you have bad knees or other serious medical conditions, this is probably not gonna be your go to mode of transport. 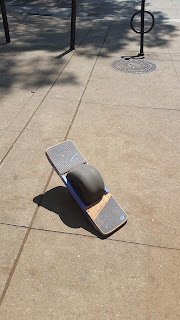 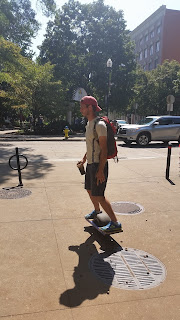 He who throws mud loses ground.

Have a wonderful week, everyone and God speed.  Please keep the people of Puerto Rico in your thoughts and prayers!